This is a second post I've decided to make, specifically about things I discover while playing Corum III in English.  Part One, about installing and getting the game working, can be found here.

I've considered making a walkthrough of the game, but I don't think there's any way for me to do that without including spoilers, so for now I will simply list any significant errors I find, or useful materials.

I found it a little frustrating and confusing trying to find where people live in town, so  I made a map with everyone's name on it.  I assume all the names are the same between the BeOS and Windows versions, but I only checked a few names.  You should be able to save the full-size map by right clicking the image and clicking "Save link as" 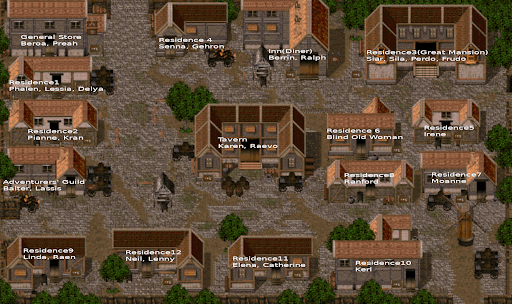 Ok,  It's not at all obvious how to use magic from within the game itself.  I'm sure it probably explains it in the manual, but in spite of my best efforts I have not been able to find a copy of the manual in English.  I have found one in Chinese, but it's not in a format that I can easily translate.  It took me a long time to figure out how to use magic in the game.

The basics:
Hold down your attack button and then press the combo that's listed in the "magic" section of your settings menu.  This should work for Kaien any time you're in a combat area.  You will probably need to let go of the attack and press it again to cast a subsequent spell.  Once you level up your spell the cost to use the spell should be cut roughly in half, and you should get a new, more powerful, spell to level up.  You may want to wait until you're a higher level and have bought the magic cost reducing item, or the spell power increasing item, to try leveling your spells.

Elemental Magic:
Elemental magic works a little differently than Kaien's magic.  Instead of simply casting the spell, you first need to summon the elemental for that magic.  You summon an elemental by holding attack, and then pressing a direction button twice.  Up up is water, left left is air, down down is rock, and right right is fire.  Then you should be able to cast the spells as you would with Kaien, by holding down your attack button and then pressing the combo that's listed in the "magic" section of your settings menu.  Spells will generally continue to work even if you switch to a different elemental.  Also, you should be able to continue casting without releasing the attack button.  Like Kaien's spells, once you level up a spell the cost to use the spell should be cut roughly in half, and you should get a new, more powerful, spell to level up.

I had some trouble with button presses not always registering.  It might be easier with keyboard rather than gamepad.